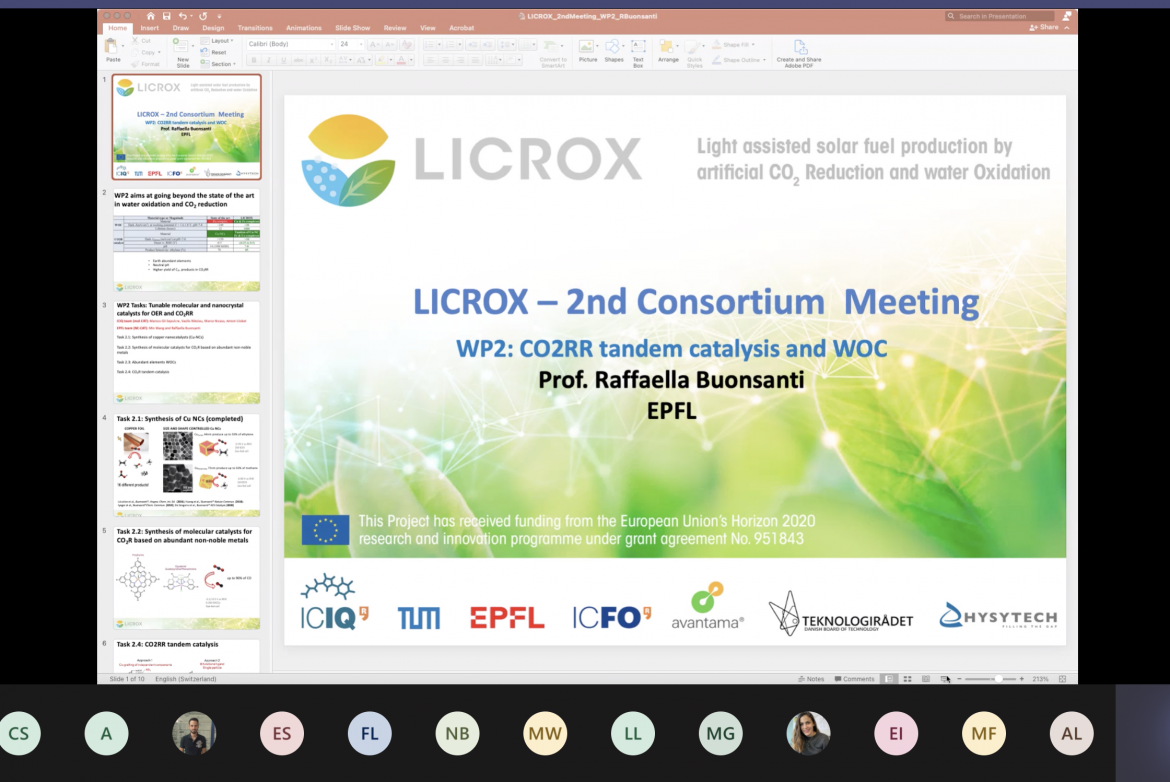 The LICROX consortium gathered virtually for a two-day meeting on the 17th and 18th of March to share updates and developments six months after its kick-off meeting.

The representatives from the seven consortium partners were joined by Francesco Matteucci, European Innovation Council (EIC) representative, who gave a short introduction and explanation about the launch of EIC and the different funding opportunities within the programme.

The meeting started with a welcome message from Raffaella Buonsanti (EPFL, virtual host of the meeting) who shared an introduction to EPFL and her research group, followed by a short welcome speech by LICROX coordinator Antoni Llobet (ICIQ). The first day focused on updates from WP6: Environmental impacts, social acceptance, dissemination and exploitation and WP7: Project management.

The second day of the meeting focused on the scientific progress of the project, but before diving into the science, the new members of the External Advisory Board were introduced to the team: Carolina Gimbert (researcher at the Autonomous University of Barcelona with experience in the development of molecular water oxidation catalysts and electrochemistry) and Emanuele Instuli (R&D expert at DeNora with experience in the electrochemistry field) have joined Michael Grätzel (EPFL) and Maximilian Fleischer (Siemens Energy).

The scientists in charge of the different work packages, shared updates and scientific discussion on WP2: CO2R tandem catalysis and WOC, WP3: Semiconductors for the photo-anode and cathode and WP4: Light trapping in the PEC. The team also conducted a risk analysis exercise, carried out in small teams to analyse the already identified risks at the proposal stage and discuss new ones identified in the first months of the project. The next consortium meeting will be held in six months, (hopefully) face-to-face at ICFO.

We use cookies to ensure that we give you the best experience on our website. If you continue to use this site we will assume that you are happy with it.Ok