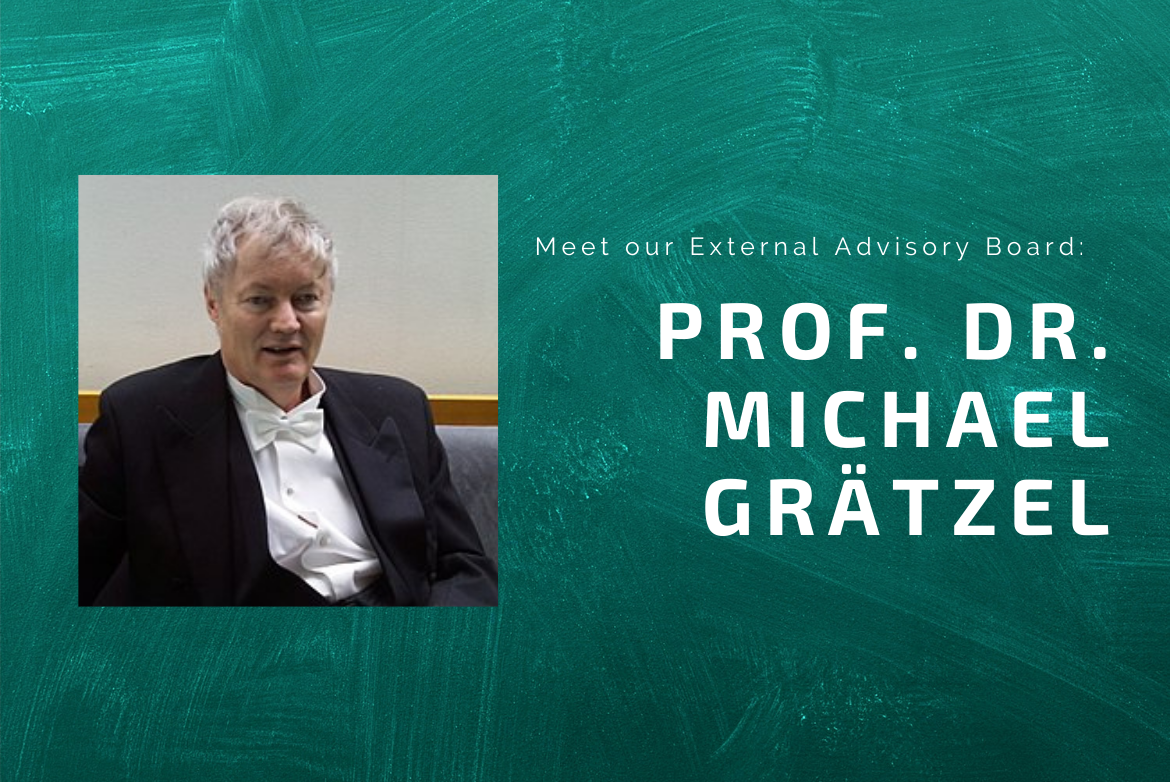 Prof. Michael Grätzel is a professor at the École Polytechnique Fédérale de Lausanne (EPFL) where he directs the Laboratory of Photonics and Interfaces since 1977. He graduated from the Free University of Berlin and in 1971 he earned the Doctor of Philosophy in natural science from the Technical University of Berlin. In 1976 he earned the Doctor of Science in physical chemistry.

In 1988, together with Brian O’Regan, he co-invented the Grätzel cell, for which they are credited with moving the photovoltaic field beyond the principle of light absorption via diodes to the molecular level. This revolutionary cell design presented a new paradigm since it features a three-dimensional mesoscopic junction, in contrast to the planar p-n architecture used in conventional solar cells. Graetzel is also a leader in the field of fuel generation by sunlight, which is a key technology to provide future renewable energy sources that can be stored. His group uses tandems of two photosystems to split water into hydrogen and oxygen and reduce carbon dioxide by visible light. He has authored over 1600 publications and is inventor or co-inventor of over 80 patents, for which is credited with being one of the most cited chemistry academicians globally. He has received many awards, including the Millennium 2000 European innovation prize, the 2012 Albert Einstein World Award of Science, and the BBVA Foundation Frontiers of Knowledge Award in 2020.

How is LICROX pushing innovation in the sustainable energy landscape?

The LICROX project is very innovative, I was positively impressed when I participated in the kick-off meeting. LICROX is using new concepts, like the specific activity of Cu nano-crystals, or the use of a semi-transparent organic photovoltaic solar cell (OPV) as an intermediate layer to generate enough potential to drive the CO2 reduction – which is a challenging electrochemical process, not as straightforward as with hydrogen. For CO2 reduction the OPV has to bring the voltage in, and having the membrane in the middle of the cell to generate this extra power is a very nice concept. There’s a lot of innovation in this project, which is probably the reason why it was awarded – European projects are very competitive!

What are the biggest challenges for solar fuel production right now?

It’s not the technology but the cost of the solar fuels that will hinder their implementation. In the end, it will be the cost per kilo of the fuel and how it compares to the competing products that will make the difference. Systems that convert CO2 to ethylene are now being developed with up to 80% faradaic conversion efficiency. This is an amazing achievement; I wouldn’t have thought this would be possible five years ago. So, science has been progressing very rapidly and more researchers are joining the effort, which is promising. I think science and technology will drive this for the next few years, but I don’t think we’ll build plants that produce solar fuels yet, because we first need to address all the scientific issues and then pick the systems that are cost-effective.

Your revolutionary cell design presented a new paradigm in photovoltaics, what do you think is going to be the next revolution in the energetic landscape?

I think it’s solar fuels. I’m also working in this field, which is picking up a lot of speed now with developments like perovskite tandems. But this is something straightforward, there’s no real innovation in it. We need to further it from an engineering point of view, this is extremely important because otherwise, it will never become practical.

From a scientific point of view, I think the next great innovation will be the fixation of nitrogen: converting nitrogen to ammonia is a very attractive reaction to drive by sunlight. Not so much for fuels (although ammonia can also be used as a fuel) but as a fertilizer, that’s where ammonia’s real value is. The world needs fertilizers, which are ammonium compounds and at the moment ammonia is produced through the Haber-Bosch process which uses huge amounts of energy. If we cut the energy consumption linked to the Haber-Bosch process, greenhouse gases will be substantially reduced worldwide. I think more people should join this line of research because it’s the next big thing after addressing the fuels challenge. We have to find light-driven reactions to replace the processes that consume vast amounts of energy and produce lots of CO2 and greenhouse gases like Haber-Bosch and the calcination of carbonate to make concrete – these are two reactions that should really be better managed and controlled.

From your point of view, what are the most important scientific areas on which funding should be spent?

Catalysis is very important and although it has become quite popular, there’re still a lot of issues to be solved with it. Catalysis saves energy, when you have a good catalyst you spend less energy, just look at the water-splitting reaction: its thermodynamic potential is 1,23v but usually, you have to spend 1,6v – which is a huge overpotential loss mainly due to the oxygen evolution reaction. Nature shows it can do this with a very low driving force, so I would say the mimicking of enzymes is one of the best strategies to address climate change too. For instance, methane is a terrible greenhouse gas that is released when drilling for oil. It’s barely used by industry and since it’s a greenhouse gas, much worse than CO2, it’s burnt. I think the best thing to do with methane would be to oxidize it into methanol. Although we don’t have a good catalyst to do so, nature does: the oxygenase enzyme. So, we have to use enzymes as a guide to developing catalysts and by mimicking nature we’ll solve pressing problems.

Science is increasingly multidisciplinary; do you have tips for young researchers to foster fruitful collaborations?

My recommendation is to learn one trade well. Don’t try to be superficially informed in all sorts of things – that won’t make you a good scientist. Focus on one thing and go through the training, then you can pick for your thesis something interdisciplinary, so you can pick up know-how from other fields that are part of your thesis domain. In my opinion, basic education is extremely important.

We use cookies to ensure that we give you the best experience on our website. If you continue to use this site we will assume that you are happy with it.Ok